This 2019 Volkswagen Atlas has been recently dismantled, and all the parts are cleaned, tested, and shelved and are ready to be purchased.

Some of the OPTIONS this Volkswagen SUV had:

The exterior color options available for the ’19 Atlas model year were:

There were only two interior color options available this model year:

What was the first year the Volkswagen Atlas was available?

How many passengers does the Atlas seat?

The VW Atlas is the largest vehicle Volkswagen produced. It seats a total of 7.

What’s the towing capacity for the 2019 Atlas?

The Atlas can tow a maximum weight of 5,000 pounds.

Wolf Auto LLC, also known as WolfAutoParts, has been around since 2010. Helping thousands of customers keep their Audi, Volkswagen’s, and other German vehicles on the road. Over the past decade, we’ve dismantled close to 1,000 Audi, BMW, Volkswagen, and Porsche vehicles.

Often, the dealership charges an arm and a leg for seemingly trivial parts. We sell our used OEM parts for significantly cheaper and offer a 30-day moneyback guarantee protecting you against any defects during that time.

Check out the hundreds of positive reviews and satisfied customers. We’re confident you’ll be happy going through us for all your OEM part needs.

This 2019 VW Atlas has been dismantled, the parts have been cleaned and tested, and are ready for purchase. This 2016 Audi A6 3.0 (supercharged) has been parted out, and the parts are now available on WolfAutoParts.com.

It had low mileage at 16,761, so the parts found on this C7 were in better condition than most. Here’s a quick rundown of some of the unique characteristics of this vehicle.

While Audi doesn’t recommend it, your A6 will still run with regular unleaded gas. It won’t perform to its optimal potential, and I wouldn’t recommend doing it all the time, but it will work fine in a pinch.

What engine configurations does the ’16 Audi A6 have?

This particular A6 we dismantled was the 3.0L supercharged. This 1990 Audi Coupe Quattro is the oldest vehicle we’ve ever dismantled. We tend to stick with newer stuff, but we’ll get a “classic” in every once in a while.

We don’t keep a lot from vehicles this old since the part’s condition is usually pretty rough, so the amount we retain will be limited.

All the parts on this Coupe Quattro have been cleaned/tested and are ready for purchase.

Does the B3 Audi Coupe quattro come in RWD?

The only option Audi made for the Audi Coupe Quattro was All-wheel drive, hence why they named it “Coupe QUATTRO.”

How rare is the Coupe Quattro in the U.S.?

664 Coupe Quattros were sold in the U.S., considering it’s been over 30 years since manufacturing the last CQ, there are very few on the road or even available for sale today.

After a quick search, I could only find one CQ for sale nationwide. You may be able to find one on a forum or obscure site, but you’ll likely pay a premium if you do find one nowadays due to the scarcity. This 2003 BMW Z4 convertible has been dismantled, all the parts are cleaned, tested, and shelved, and are ready to be purchased.

We had high hopes of fixing this one up to resell it, but in the end, we decided to part it out due to some common but expensive problems found with the convertible top.

As of this time, we’ve dismantled a total of four BMW Z4’s, so if you’re looking for used Z4 parts, we probably have what you need.

Information regarding this ’03 BMW Z4

In the 2003 model, there were two engine options for the Z4, the 2.5L, and the 3.0L. This particular BMW Z4 we dismantled had the 2.5L engine paired with the 5-speed MANUAL transmission.

Some of the OPTIONS this Z4 had:

It will depend on its condition, how many miles it has, the different options, and engine size.

Are there any BMW Z4’s with All-Wheel Drive?

No, ALL BMW Z4’s come with Rear-wheel Drive. There is no option for any other drivetrain.

Is it worth buying a used BMW Z4?

They are surprisingly cheap to buy compared to most BMWs, and I can see the appeal if you don’t need space for more than two people and are using it more of a secondary vehicle than, in my opinion, it’s not a bad choice.

Be mindful that just because it’s a “cheaper” BMW doesn’t necessarily mean you will get the replacement parts for cheaper. As vehicles age, part manufacturers discontinue many parts, making the used parts market the only source for parts. While you may find some reasonably priced, some will be astronomically high due to the demand or scarcity.

It’s something to consider.

It’s a good-looking car that performs well, might even achieve classic status in the future. This 2010 BMW X5 4.8L has been parted out. All the parts have been tested, cleaned, and shelved; they are ready for purchase.

This X5 is the V8 version which boosts the price above the standard 3.0L V6 (xDrive30i).

Some of the options this BMW E70 had:

Three engine variations were released for the ’10 BMW X5.

Is the BMW X5 good in the snow?

Yes, the X5 is excellent in the snow with a good set of winter tires. Good winter tires and AWD is a perfect combo for winter weather.

WolfAutoParts has dismantled numerous BMW X5’s to date. We have over 12,000 used BMW X5 parts alone and growing.

We’re consistently adding to our BMW inventory. Even though the parts are used, we offer a 30-day warranty. 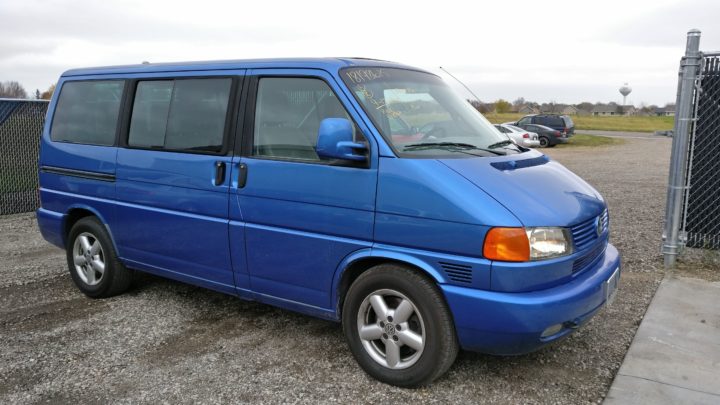 This 2002 VW  has  out, and /tested.  parts are becoming harder and harder to find nowadays; we’ve dismantled a few  and most likely have the parts you’re looking for.

The interior and exterior parts were in good shape for a vehicle that had near 200,000 miles.

The body had little to no rust. The seats, interior trim, dashboard, door panels were clean. This  looks well taken care of.

Most of the parts off this EuroVan GLS will fit the EuroVan MV / Winnebago  models.

Does Volkswagen still make the Eurovan?

Unfortunately, the EuroVan was discontinued in 2003, which is why many today are still fixing theirs up. 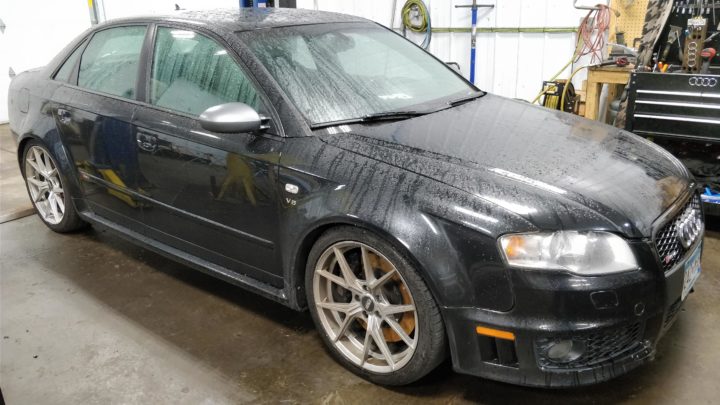 The exterior and interior were in pristine condition. The engine didn’t start, so unfortunately we had to dismantle it, the cost to repair it was too much to be worth it.

Just a few options this RS4 had: 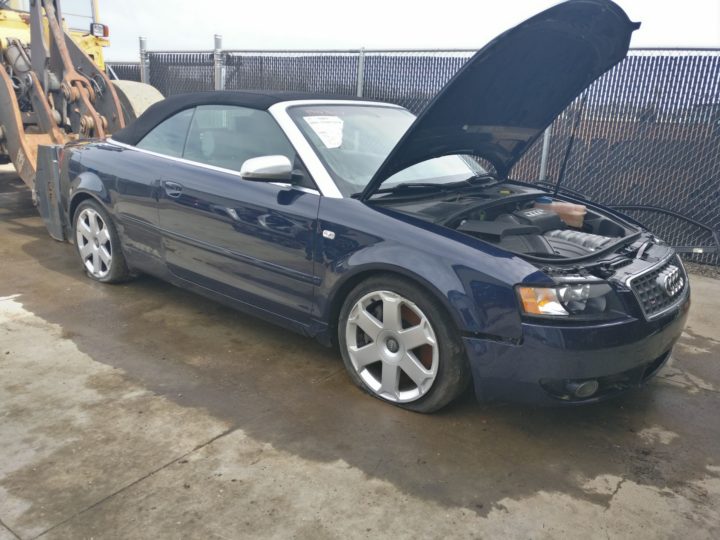 Just a few of the options this car had: 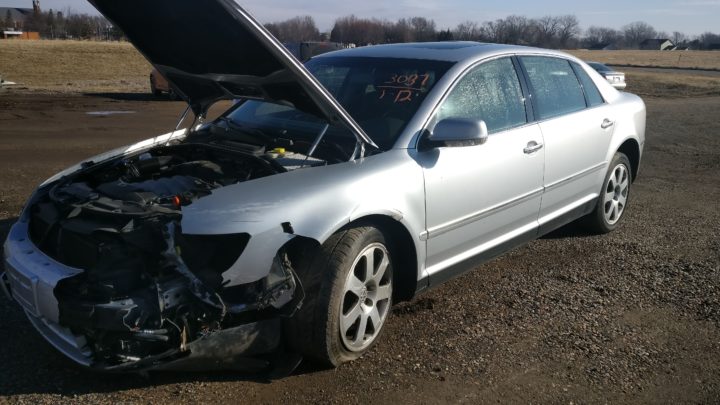 This 2004 VW Phaeton was our first Phaeton we’ve ever dismantled. It’s Volkswagen’s version of the Audi A8. It’s full of luxury features and plenty of room for all passengers. Just some of the options this vehicle had: HID headlights, Volkswagen 4MOTION (AWD) system, air suspension, auto (rain sensing) windshield wipers, massage and cooled front seats, etc.

This Phaeton was involved in a front end collision, but had over 600+ good (tested) parts. 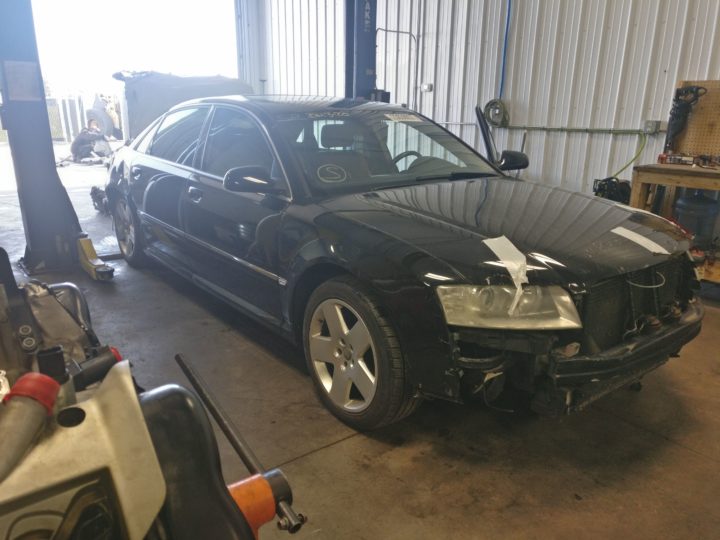 This brilliant black 2004 Audi A8L (D3) had around 185k miles when we got it in the shop. The total number of good parts we salvaged off this car was 539. Just some of the options it had were memory mirrors and seats, AWD (Quattro), air suspension, high gloss (vavona wood) trim, HID headlights, and park assist. The MSRP on this vehicle was $68,500.

Even though this A8 was involved in a collision it still had plenty of good used parts that were tested.

The 2004 A8 was the first year of the D3 platform in the United States. The A8L provides more legroom for the rear passengers compared to the standard A8.